We are approaching March 19th and Father’s Day, so we thought to make a collection of recipes for this day.

In Italy, typical pastries of Father’s Day are “Zeppole di San Giuseppe”. I found a recipe in English that you can find in this article.
Then we reported some recipes for your Dad, sweet and savory 😉

Father’s Day is a celebration honoring fathers and celebrating fatherhood, paternal bonds, and the influence of fathers in society. In Catholic Europe, it has been celebrated on March 19 (St. Joseph’s Day) since the Middle Ages. This celebration was brought by the Spanish and Portuguese to Latin America, where March 19 is often still used for it, though many countries in Europe and the Americas have adopted the U.S. date, which is the third Sunday of June (falling June 18 in 2017). It is celebrated on various days in many parts of the world, most commonly in the months of March, April and June. “Zeppole di San Giuseppe. St. Joseph, Jesus’ father, is Sicily’s most important saint. And, the Festival of St. Joseph is celebrated on March 19th with the same passion and excitement as Thanksgiving is celebrated here in the States. In the middle ages, there was a pretty serious drought and famine and the peasants prayed to God for rain and asked St. Joseph to go to God to support their cause. They promised a special feast to honor St. Joseph if he made it rain. And, rain it did. And the holiday was born.” “I have been making stuffed French toast since my early 20’s. I’ve tried several variations, but this time around I wanted to play with chocolate and raspberry flavors.
Cream cheese is essential inside of a stuffed French toast. Before going dairy free I would just use an organic cream cheese. Now that we are dairy free, finding vegan cream cheese is easy and it tastes very good. Daiya is an excellent brand, but I have used Go Veggie and the Trader Joes brand as well. We love them all.” Recipe on the website: Stuffed French Toast Gluten Free, Dairy Free. “These simple Lobster Tails are grilled with a spicy sriracha butter for a delicious star entree for any meal.”  Recipe on the website: Gluten-free Easter Cake Recipe. 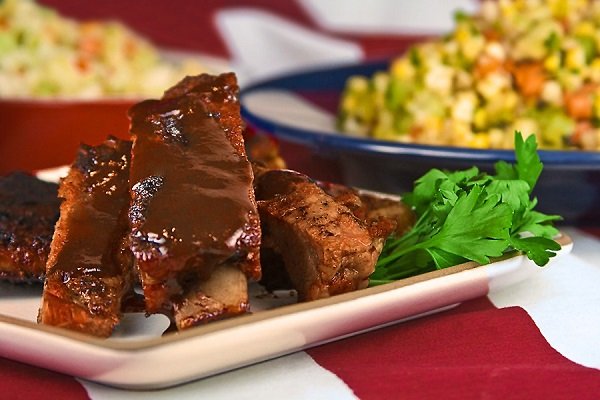 “I have cooked racks of ribs for many, many years and I’ve tried all different kinds of methods. From boiling the ribs and finishing them on the grill to starting them on the grill and finishing them in the oven. None of them gave me quite the texture I was looking for. I wanted the same texture and flavor of slow-cooked ribs over fire, but without the hours of monitoring.

I thought I was making decent ribs. They tasted good but were kind of dry and a little tough. It turns out I was doing it wrong.

It wasn’t until I read about a different technique that I realized what needed to be changed. Suddenly it made total sense to me. With a little modification in my cooking technique, now I am making ribs that my friends and family beg for!”. Recipe on the website: Melt in your mouth ribs recipe (gluten-free).